The call came out of left field.

“We’d like you to speak at the Digital Summit in Phoenix in a few weeks. What do you think?”

Me: “You sure you got the right guy?”

“Yup. We’re ready for someone to come in and challenge Digital first/only thinking.”

Me: “Well you’ve come to the right place.”

Now I know you know that I’m not a Digital-hater guy. I’m just a Digital-In-The-Context-of-the-Larger-Strategy guy.

So last Monday, off I went to the Phoenix Convention Center. 3:05pm. Packed room. 200 (mostly) young souls. 30 minutes on stage.

And…no one threw anything at me! In fact, the audience feedback, as shared by the organizers, was pretty positive:

“Great presentation. Good to hear the other side of digital.”

“Jim had great energy and loved that he brought everyone back to the basics on the full marketing mix.”

“Genuinely surprised by how much I enjoyed the talk and how useful I found it.”

“Excellent presentation. It was an honest approach to opening up the discussion about all forms of marketing without completely focusing on digital only. I loved it.”

Phew. Because, trust me, I didn’t know what to expect. After all, Digital first/only thinking seems to dominate today’s marketing narrative, especially, of course, at the Digital Summit.

So now that I got that speech out of my system, I figured I’d give you the highlights of what I said. Let’s see what you think.

The Framework: I Got Issues

But when it comes to Digital first/only thinking…well…I Got Issues.

There’s a funny meme going around. Maybe you’ve seen it. Two simple flow charts on one page. On the top is the Sh*t Marketing flowchart, which goes:

Which is where a lot of Digital-first Marketing is right now.  “Let’s run an Insta campaign.”  “Let’s try a paid Facebook campaign.” “Twitter Promoted Post, anyone?

The flowchart of choice should be the Strategic Marketing one, which looks like:

Notice how there’s no mention of media platforms in there? That’s as it should be. Yet in the Digital era, it seems everything is starting at the Tactics step.

Furthermore, a lot of Marketers could use a refresher in the 4Ps of Marketing. You know the 4PS, right?

And Promotion, where many marketers now start, should actually be the last consideration, as put rather pithily by the guy who runs strategy for MediaCom in a recent tweet:

One of the most annoying things about Marketing right now is that the narrative is totally dominated by B2B “data driven” theories.

It’s like my Twitter feed is an echo chamber of B2B consultants consulting other consultants on how to consult, minus any consideration of vastly different marketing situations (not to mention a total lack of ROI-based case studies).

Here’s what I’m saying: Selling SaaS to the C-Suite has very little in common with selling Ice Cream to Moms. So we have to stop it with this conflation. Instead, we have to start using the two most important but least heard words in Marketing today:

Yup, it depends. Is this a B2B or B2C assignment? What’s the market size (in terms of both dollars and trade areas)? Is it a product? A service? What’s the price point? What’s the purchase frequency? Is this Retail? E-Tail? Direct to Consumer? You get the picture…

All of this conflating has caused me to create what I call my “It Depends” Marketing and Media Mix Model, which starts with a key assumption:

That certainly seemed to be the big takeaway for the Digital Summit audience: 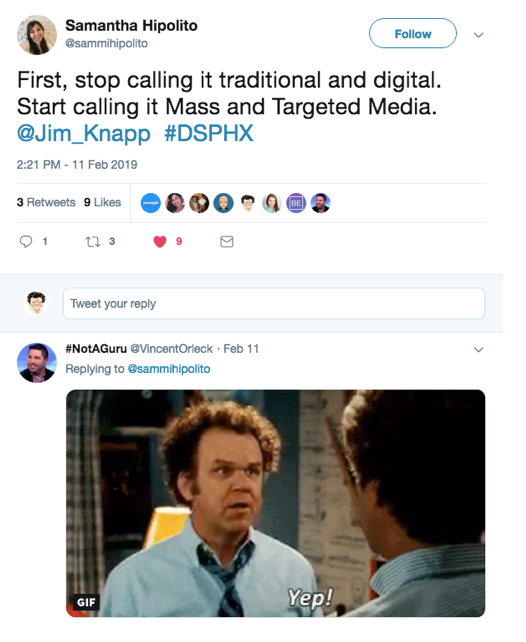 Oy do I despise this term. For two reasons.

One, consumers are an irrational bunch and they’re often moved by seemingly irrational ideas that no data pattern can guide.  Which is why I prefer to say it’s “idea driven marketing” that’s informed by data.

But let’s be real because, as Bob Hoffman the @adcontrarian points out, marketing is at best about likelihoods and probabilities. It’s basically, if we’re being totally honest with each other, “precision guessing.”

As that braniac Einstein once said:

Now I can’t confirm he also meant that E=MC(2) stands for Effectiveness = Much Creativity Squared in Marketing, but I also don’t think that’s far off.

As Les Binet and Peter Field maintain in their heavily researched book The Long and Short of It, brands have veered way too far toward activation tactics when, the authors conclude, the right balance is 60% Branding and 40% Activation for most B2C brands. Provided, of course, that you’ve developed a compelling, creative message to communicate.

Anyone who’s breathed the same air as me over the past ten years knows that I’ve been pounding away on the point that TV, Radio, Print and Outdoor don’t have effectiveness problems, they have attribution problems.

Thank goodness that 2019 appears to be the Year of the Attribution Platform.  And there are plenty out there, like C3 Metrics, Proof Analytics, Leads RX and Analytic Owl, which are connecting the offline and online dots, and rendering, I pray, the end of the “last click attribution” nonsense that’s made Google look so good all these years.

Ah, never mind. I’ve caused you enough brain damage at this point.  So let’s end it the way I did at the Digital Summit….with a little Kumbaya.

Because, as I think we can all agree…

As in integrating Mass Media and Targeted Media to both create and fulfill demand more powerfully, effectively and efficiently than is possible with a disconnected approach.

Now that really captures the true view from atop a Summit, don’t you think?